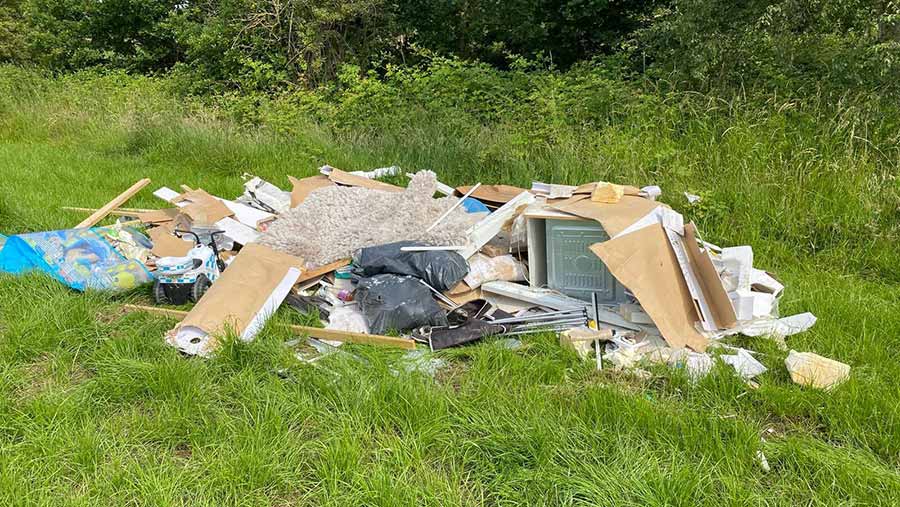 Fed-up farmers have shared videos of waste dumped illegally in their fields to further illustrate the damage and disruption caused by the deluge of fly-tipping in the countryside.

Merseyside farmer Olly Harrison appealed for information after he said a van dumped a load of rubbish in a field on Cartbridge Lane, Halewood on Friday afternoon (2 July).

See also: What to do if you’re a victim of… fly-tipping

Smashed glass was scattered across the grass, and a cooker, a paddling pool and a large rug were among the items discarded in the field.

Mr Harrison posted a video on his Twitter page of the rubbish piled up near the edge of the field.

Please please share 😡
We need to catch the scum

The farmer said he found fly-tipped rubbish on his land on a weekly basis, and the biggest frustration was finding waste tipped in the fields, including concrete blocks among crops.

“They are getting cheekier and going into fields now. It used to be gateways and tracks, but now it is summer they are coming into the fields,” Mr Harrison told Farmers Weekly.

“We’ve had two other cases the week before where they have driven through a field of wheat behind the hedge where it is high and they can’t be seen and tipped out there, and another one in a field of barley as well.”

Trail cameras the farmer had put up to try and catch fly-tippers have been stolen.

In a separate incident last Friday, South Gloucestershire dairy farmer Richard Cornock posted footage on YouTube of building materials and an oven that had been dumped in his field.

The farmer also found a syringe among the rubbish.

“There is basically a whole kitchen here,” Mr Cornock said in the video, before warning his two sons to watch out for nails that have been discarded in grass.

Data from the Environment Agency (EA) shows farmers as the group most affected by large-scale illegally dumped rubbish.

More than half of the 800-plus respondents to the EA’s national waste crime survey suggested that large-scale fly-tipping had increased over the past 12 months, with 15% of landowners making an insurance claim to clear dumped waste.