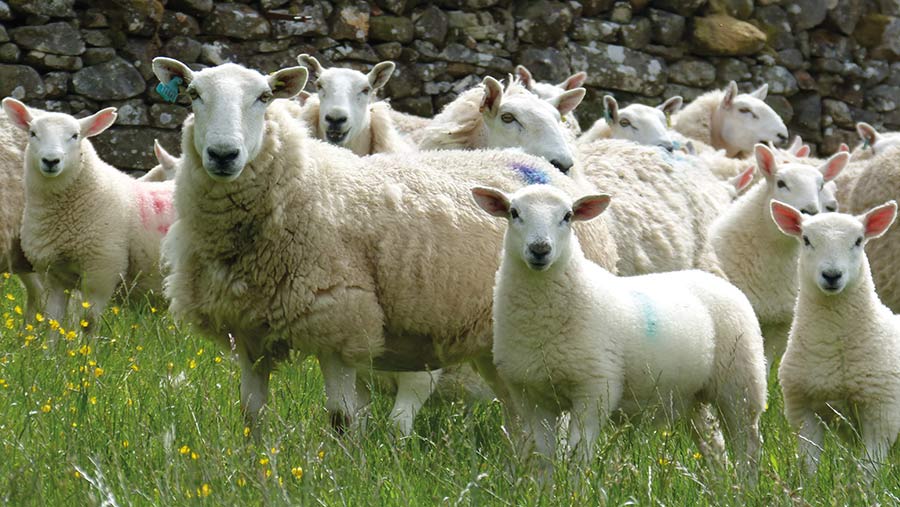 Rising costs and diminishing subsidies have made many upland farms review output and systems.

Numerous units have switched to a Cheviot sire for this reason, either to breed replacements or as a terminal sire for store or prime lambs.

Society sales have seen throughputs and averages lift and the Cheviot Mule has seen an explosion in popularity.

North and South Country Cheviots have a hill-and park-type strain, meaning the sheep can suit a variety of hill environments.

Farmers Weekly speaks to three breeders using Cheviots with a firm eye on the future.

Switching to Cheviot tups is part of a Dales farm plan to save £9,200 in winter costs by producing a more marketable store lamb for the autumn sales.

Paul Brown and family at Swale Hall, Reeth, currently sell about 500 of their 1,000 lambs as stores at Darlington Farmers Auction Mart (DFAM). 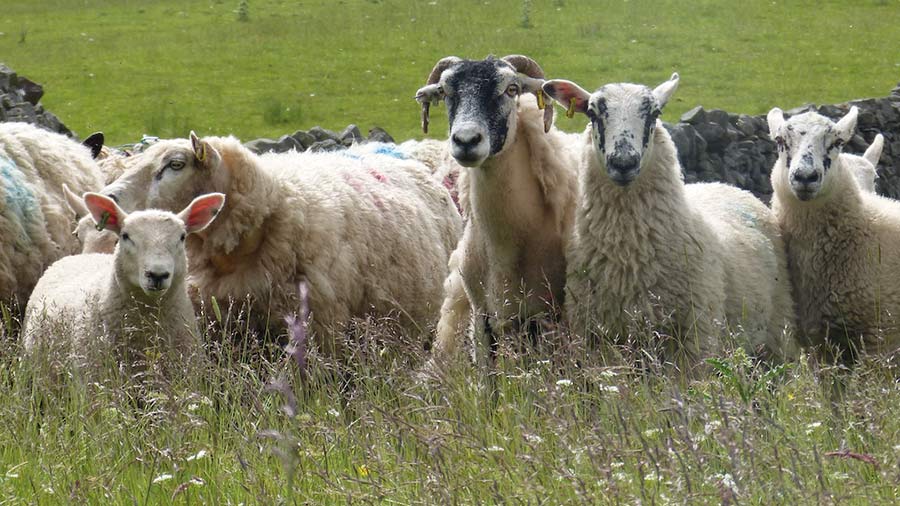 Previously focused on finishing most of their wether and reject gimmer lambs on hoppers in meadows, they used to carry 400 lambs into the winter for nine weeks on average.

However, the Cheviot-cross lambs are keenly sought after in August and September. Last year, the stores (mostly at 35kg) sold for £75-£108 a head.

The Browns have also been impressed by the breed’s vigour at lambing.

“If store price is £80, fat price would have to be £103 nine weeks later to break even when accounting for winter costs,” says Mr Brown.

He concedes that farmers growing root crops can feed them for a lot less, but that doesn’t suit the farm.

Historically, the farm bred pure Swaledales, selling draft ewes from a stratified system, but a Swaledale tup hasn’t been used for three years. Bluefaced Leicesters breed Mules for sale, and Texels and Suffolks are used as terminal sires.

A group of 150 home-bred Swaledale cross Cheviot hoggs are grazing the fell this summer. They will be bred to Hill-type Cheviots, bought at Clitheroe again this autumn. This will, hopefully, add hybrid vigour, carcass quality and longevity to the hill sheep, says Mr Brown.

Some Mules and Texel-crosses have been sired by Park-types bred by DFAM fieldsman Stephen Dodsworth to add size, lamb vigour and conformation.

His flock is based at 457m in Nenthead, Cumbria, where every lambing is recorded for lambing ease and vigour.

“I like the commercial focus of the Cheviot breeders I’ve met,” says Mr Brown. “The rams run away from a bag of feed.”

Genetic gains in prolificacy and maternal ability have lifted ewe output in a North Country Cheviot hill-type flock in the Scottish Borders.

The Tennant family at Shaws Farm, Newcastleton, have not bought a tup for 28 years. Instead, they have used Signet recording to build on the hardiness, conformation and vigour of the breed.

This has been done by using a specific maternal hill index to choose the best mothers and select for a manageable increase in twinning. 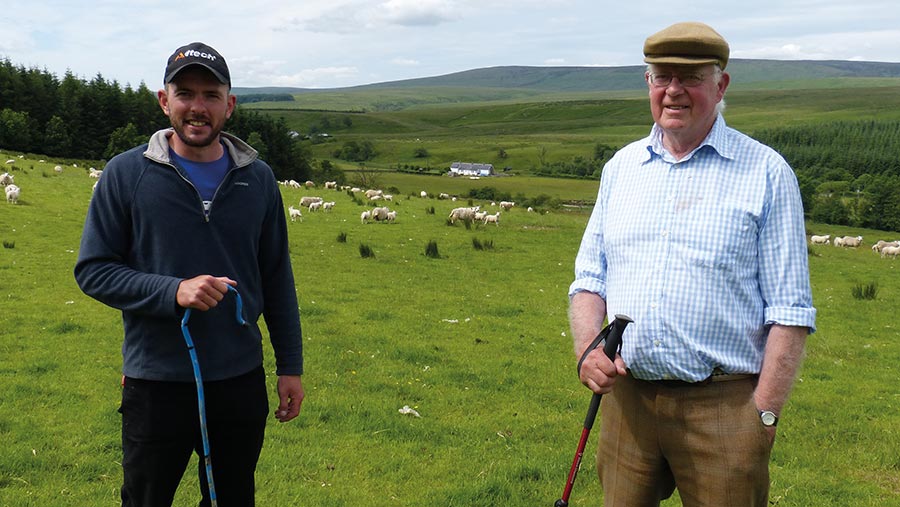 Twinning rate is consistently 66%, up from 50% in 1993 when performance recording to purely home-bred sires was started.

The recorded flock consists of five families of about 50 ewes, each with a different coloured ear tag. All lambs produced on the farm are weighed and recorded.

“We have improved the farm with lime and bracken cutting, so it’s not all genetic,” says Mr Tennant. “Recording is extra work but is very worthwhile.”

The Tennants finish their lambs on grass at the Tennant’s other 182ha (450 acre) farm, Hartshaugh Mill in Bonchester Bridge, for sale at Longtown market at 42-45kg.

However, shepherd Kyle Thomson’s next plan is to improve rearing rates by housing all twins and carefully selecting rams to buy, as inbreeding is at 8-9.2%.

Sheep genetics company Innovis has invested in Cheviots after seeing the potential they have on low-input, extensive hill farms.

Bowhill Farming on the Buccleuch Estate has been a multiplier for Innovis since 2007 and now breeds Cheviots in partnership with Innovis at Eldinhope Farm, near Selkirk.

Formerly a tenanted hill farm, Eldinhope and its 1,600 hefted South Country Cheviots were taken back in hand by the estate in 2017. It is contract-shepherded by brothers Duncan and Callum Hume from Sundhope, the next-door farm. 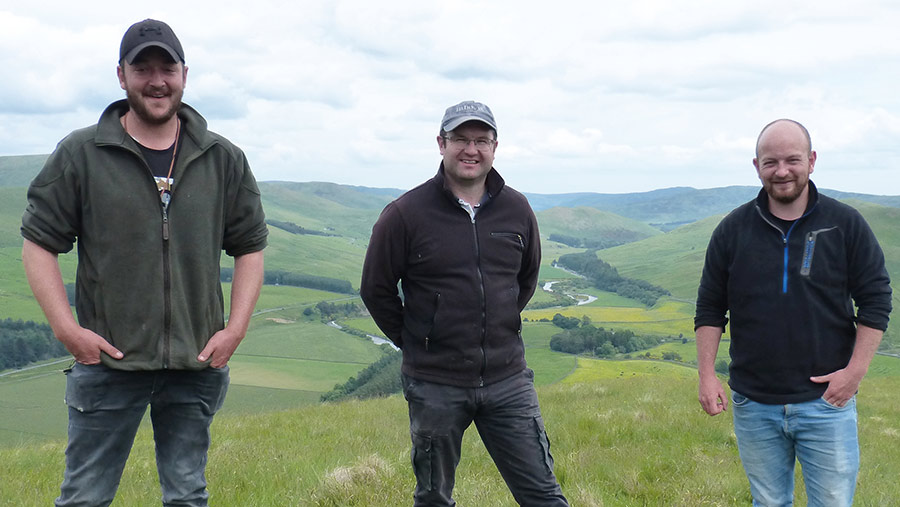 Innovis manages flock performance recording and the Humes are responsible for management, as well as their own 1,380 South Country Cheviots and 80 Blue Grey cattle.

Ewes graze 10 hefts of a grassy hill up to 520m. Ewes are brought down into an in-bye field to lamb 10 days before lambing. A handful of pens is erected in the field – nothing ever comes inside.

A full DNA profile of 300 sheep on the most challenging heft was done to find sires from the hardest working genetics and lambs are tissue-tagged. Some recorded rams – including the Tennants’ – have been used to get figures into the flock quickly.

The rest of the Innovis nucleus breeds have moved from Aberystwyth and are on another Buccleuch tenancy, at the 263ha (650-acre) Southfield farm.